Use of the ESPT in Namibia

The NMCP identified three questions for the ESPT pilot in Namibia: 1) given the lack of surveillance data, what is the baseline vector species composition, distribution, and behavior across all malaria endemic regions in Namibia?; 2) what are the gaps in protection that vector control planning can target; and 3) is IRS working effectively against local vectors? 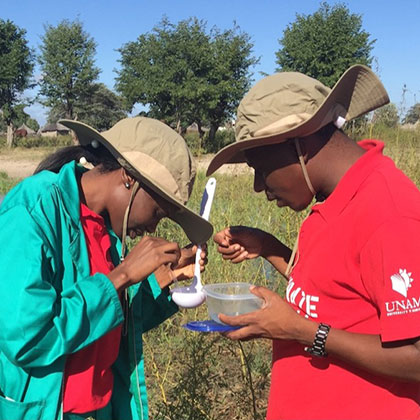 The logic framework of the ESPT was used to move through indicator and sampling method selection, site selection, sampling design, budgeting and staffing, and iteration, with participation of the NMCP, partners, and MEI technical assistance. The MEI also provided technical, financial, and operational support to build a new combined insectary and entomological laboratory, and refurbish a second, provided technical assistance for annual trainings and ongoing on-site and remote mentorship, and guided an evaluation of locally appropriate sampling methods.

Results indicated a much larger diversity of vectors and their distribution and behavior than previously known, including the predominance of Anopheles gambiae s.s. and, to a lesser extent, An. funestus s.s. where An. arabiensis was thought to be the primary vector. The characterization of present anthropophilic and endophilic vectors may explain the increase in malaria transmission witnessed in recent years. Overlapping vector behaviors with human behaviors (using human behavior observations as detailed in the ESPT) revealed gaps in protection both outdoors and indoors during peak biting times that informed a demonstration project led by the MEI and NMCP with supplemental vector control and personal protection tools (as well as drug-based interventions) to address gaps in protection. Results also indicated widespread resistance to deltamethrin, which led to a rapid NMCP decision to switch to Actellic for their IRS campaigns. This evidence also triggered development of a national insecticide resistance monitoring plan and an integrated vector management plan.