Use of the ESPT in Panama

In Panama, the NMCP identified several questions for the ESPT pilot, including: 1) when and where are humans being bitten by malaria vectors?; 2) are IRS and LLINs effective control measures?; and 3) what are the gaps in protection? The NMCP carried out the pilot in one of the last remaining malaria hotspots in the country. The MEI provided technical assistance, training, and significant on-site and remote mentorship to the NMCP and partners to develop an entomological surveillance plan, and also guided the evaluation of locally appropriate sampling methods. 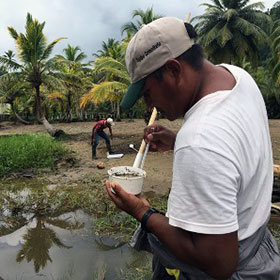 Results for question 1 indicated significant exposure to bites outside and in the early evening, although there was additional exposure overnight without LLINs, indicating a gap that LLINs could address as long as vectors are susceptible to the active ingredient (question 2). Further, human behavior observations demonstrated that human-vector exposure was driven by site-specific human behaviors such as when populations went indoors to sleep. This helped the program better understand the impact of LLINs in these communities. Vectors were not found to rest indoors, indicating that IRS may not be the appropriate intervention, although the MEI recommended further surveillance on resting behaviors. Vectors were also found to be resistant to fenitrothion, the insecticide used for IRS, confirming the switch to SumiShield (under consideration by the NMCP) was necessary. Beyond the use of entomological evidence to inform these vector control decisions, the NMCP found the ESPT and this evidence to be an important advocacy tool to promote the role of entomological surveillance for malaria elimination in Panama. Encouraged by the results of the ESPT pilot, the program has since expressed great interest in replicating this framework in the other three malaria endemic regions of Panama.